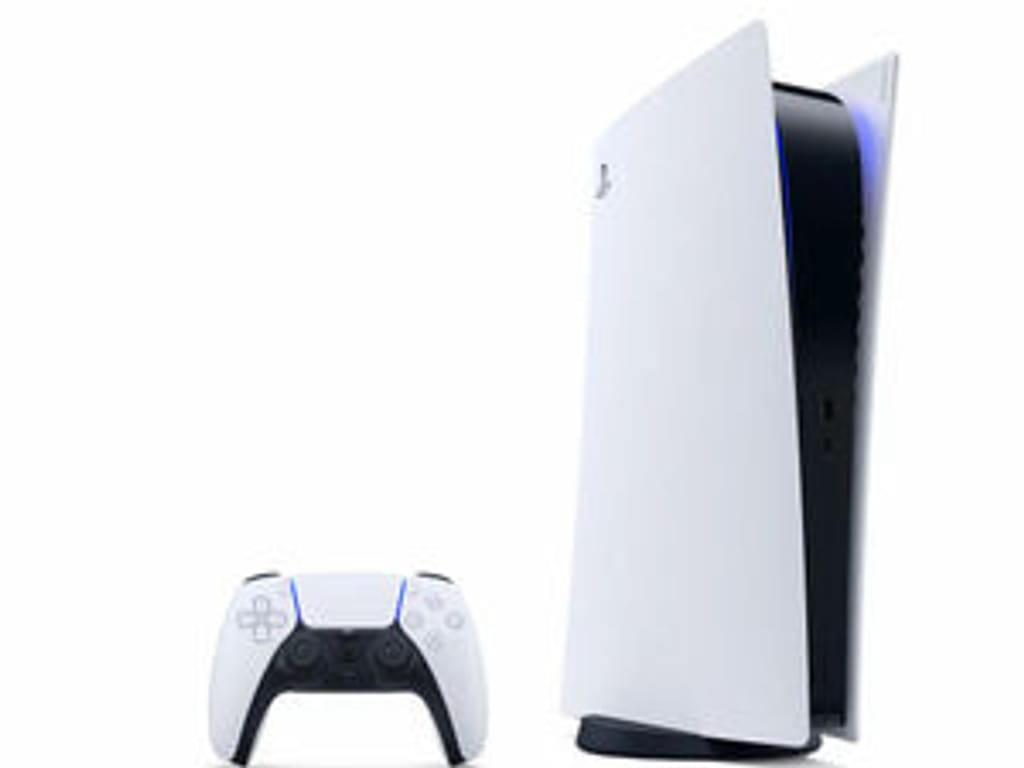 Register for stock alerts to be informed as soon as you can pre-order a Playstation 5.

Where is PlayStation 5 Console (PS5) in stock and available for delivery?

We automatically check for PlayStation 5 Console (PS5) stock 24/7 - the second we find any we instantly email you.

We currently watch 9 retailers for stock - Argos, GAME, Currys, Amazon, John Lewis, AO, Smyths Toys Superstores, Box and ShopTo. Check them out.
What do you think of this?

Kelsey
Founder
a year ago

is there anywhere that Has stock at the moment?

they're dropping them at like 5am. my partner got one cause he signed up to an app that alerts you before anyone else as he too was losing the rag with it all. endless nights sleeps, near misses etc. Think the apps £5 and he end up getting one from John Lewis or Game i think.

Hi is there going to be more stock

Does anyone know when Argos will have the ps5 in stock ?

Any more before launch ?

highly doubt there would be anymore ready before launch maybe one more batch if your lucky but best bet is to go down to your local game store etc cause am sure some people will cancel there preorders and some will come available sony came out and said 2 days ago there will be a new batch just after launch i.e maybe a week

keep and eye on agros.co.uk closer to launch am sure they took a upfront payment of £25.00 for preorders and am sure a good few of people will end up cancelling closer to time cause of the money

is their going to be anymore pre-order stock before launch or will i have to wait until launch for any stock??

is there any PS5 consoles available

Do you check stock in places like very, AO etc?

Is there anywhere got ps5 in at the moment

Not at the moment as there out tomorrow.

Do you know about the stock for pulse 3d headsets for the PlayStation ? Everywhere I keep checking is out of stock

where can i get a ps5 now. thanks 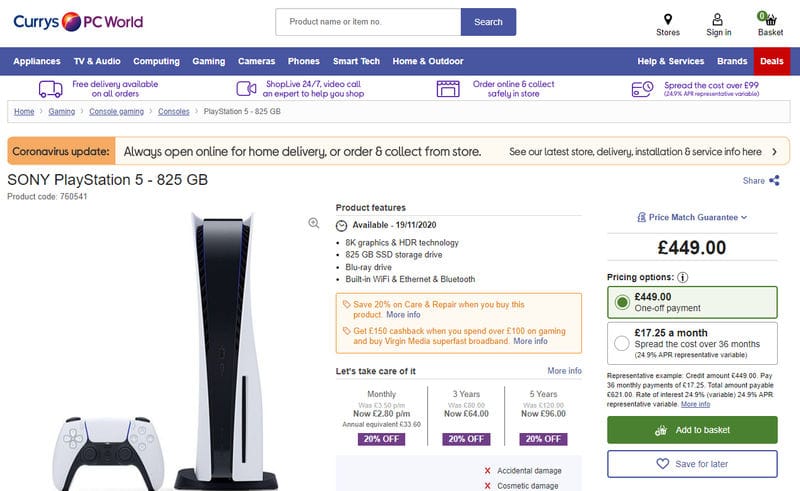 No Stock at Currys the link below isnt working

Got one from Very just now. Delivery by 17th Dec though.

Any update on tomorrow's stock schedule?

When's the next restock

Whens the next stock?

Will the be a re stock before Christmas??

Any stock for cyber Monday

Is there meant to be stock today

Where has stock right now

Anybody found ps5 yet

ridiculous why have they not made enough of these ?

I'm still looking for a ps5

Zero stock the scalpers have ******* ruined the PS5 launch EBAY should ban all PS5 consoles being listed for 4 months after a console launch same with Amazon that will stop the scalpers having a platform to sell on.

There are two consoles: the Digital Edition and the console with an optical drive. This is an option for gamers who prefer to play games using a disc. The gaming console has a dramatic design compared to its predecessors. It has a two-tone finish and has a blue light glow emanating from its interior crevices where the black and white part of the console meets. 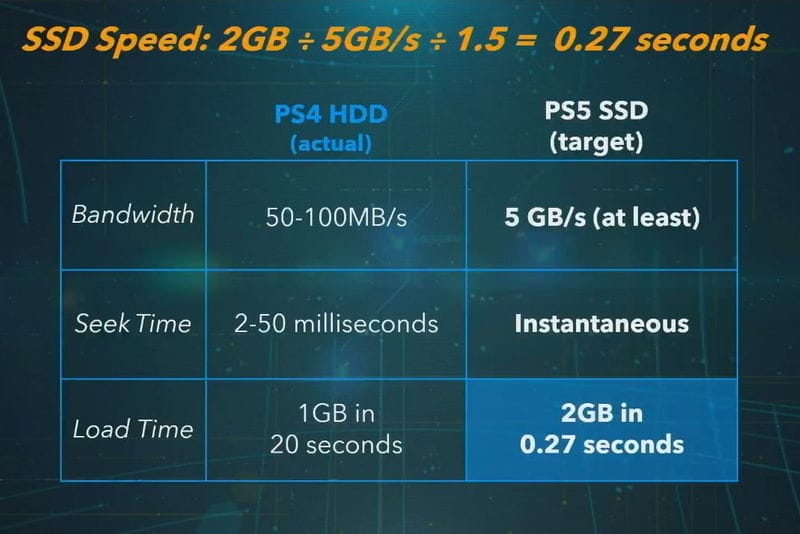 The Sony PlayStation Consoles are not new to glowing lights but the PS5 is more extravagant. The glowing blue light wraps around the top part of the gaming console. It is tall and narrow which is coloured white while the middle portion is black. It is a contrast to its rival the Xbox Series X which has a cubelike shape.

The front panel also features two ports which are the USB-C port and the standard USB port. Two buttons function as the power and disc ejection. The Digital Edition on the other hand does not have an eject button since it does not operate using a disc. It uses a DualSense controller that has the same general layout as DualShock gamepads. It has a more rounded design which is more user-friendly

Gamers Can Expect a Lot From the PlayStation 5 Games Console

The specifications of this console are very impressive. It is installed with an eight-core AMD Zen 2 CPU and it is also paired with a custom Radeon GPU. When it comes to its audio features, it is installed with a 3D audio unit. This features support directional audio. It helps to generate sound from the sides, front, and the back of the console which is quite similar to Dolby Atmos.

Instead of using a hard drive, it uses an 825 GB SSD. With this improvement, the games that you will play will have a much faster loading time. It also has numerous new features including suspending multiple games which they call the “instant game startup”. With its SSD, the user can jump from one game to another instantly without having to wait for longer loading time.

If you are interested to know where to buy the PlayStation 5 Games Console at a cheaper price then you came to the right place. Latest Deal will provide you information on where to find this particular console at a discounted price so that you can save some money on the side. The Latest Deals also has a stock checker so that they will know where this console is available at. 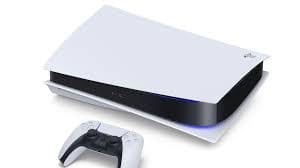 One option of PlayStation 5 Games Console will have an optical drive. There will also be a disc-less version that will be made available. This console will be able to play Blu-ray movies in 4K which the PS4 Pro and PlayStation 4 are not capable of.

Another cool feature that the developers have added is the built-in microphone that is installed in its DualSense gamepad, you can not chat with other gamers without even using a headset. Although this could be a privacy concern for others, it is a great option to be used when playing all by yourself.

A most impressive feature of this gaming console is its DualSense controller force feedback which adds tension when you pull on the R2 and L2 triggers. The L2 and R2 triggers resist the pressure of the user's fingers which allows them to feel a smooth acceleration. This improves the gaming experience of the players most especially in racing games like Gran Turismo 7. It is also a big advantage for first-person shooting games.

Play Lots of Cool Games with the PlayStation 5

Gamers can expect to see lots of crossover games between the PS4 and PS5 games. Sony stated that there will be a widespread of new games that are specifically designed and intended for the PS5 console only.

Most of these games will be out in 2021. As a sneak peeks of the upcoming PS5 games, they include:

The release date of these games is not yet confirmed.

There are a few accessories that will go with the PlayStation 5 Games Console. It includes a Pulse 3D wireless headset, a charging stand for the wireless DualSense controllers, a camera, and a media remote. The camera will be used for VR games presumably.

Expect to play your favourite games with this upcoming console. Some of the popular games include Madden, NBA 2K, Fortnite, Rainbow 6, and Call of Duty. Sony stated that there will be 26 games which will be initially released for this next-gen console. A new entry to the list is the Assassin’s Creed series.

Gamers will surely expect a lot of Esports-ready games. Some of the games that gamers will surely enjoy are Grand Theft Auto V, Project Athia, Stray, Destruction AllStars, Kena: Bridge of Spirits, Solar Ash, Hitman III, Astro's Playroom, Goodbye Volcano High, and GhostWire: Tokyo, among many others. The games that will be released have a good mix of simulation, fantasy, action, adventure, third-person shooter, combat, and racing games.