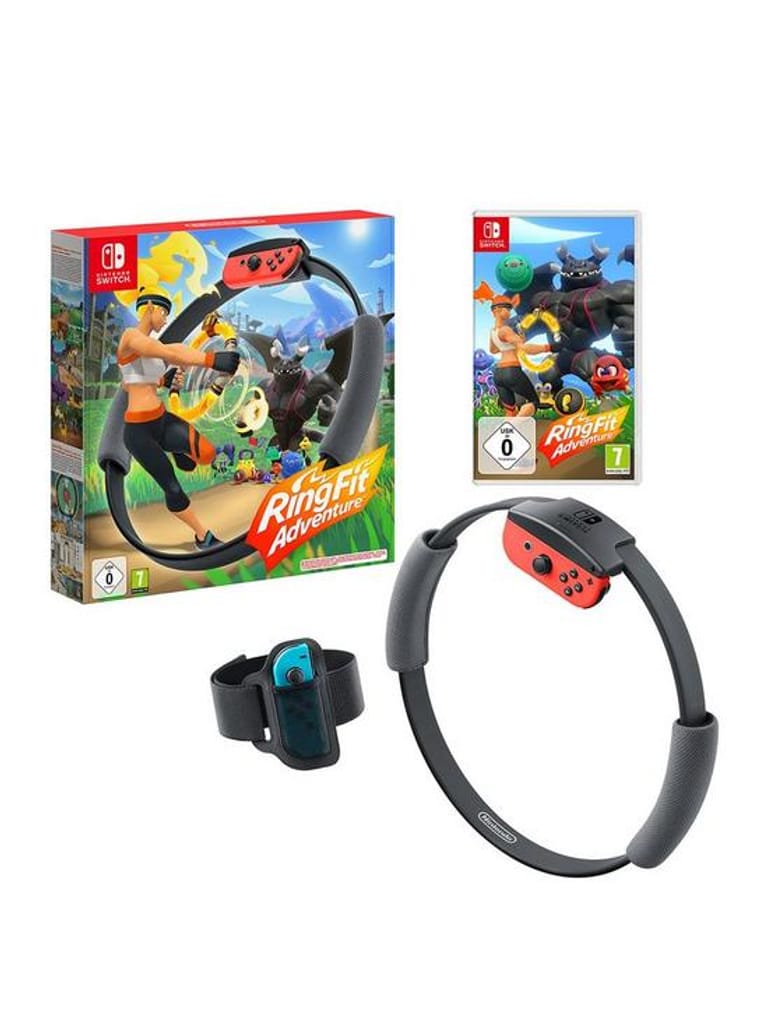 Where is Ring Fit Adventure in stock and available for delivery?

The cheapest price we've found is £53 at AO.

We automatically check for Ring Fit Adventure stock 24/7 - the second we find any we instantly email you.

In stock at Currys and Game!

The Nintendo Ring Fit Adventure is an exercising action-RPG game that was published and developed for Nintendo Switch. The game comes with the Ring-Con which is a hard flexible plastic ring that the player holds. Another physical component is a Leg Strap that is a piece of fabric that is strapped around the player's leg. Both physical components are attached to the Joy-Con slots.

This single-player game was released on October 18, 2019. The regular mode of the game is the player needs to complete a turn-based game. It is a role-playing game wherein the user needs to perform certain activities by means of movements and battle action. All movements are detected by the Ring-Con and Leg Straps.

The game also includes other modes namely party-style games and general guided fitness routines. The activities that you can do with the game focuses on common fitness exercises which is part of the "quality of life" goals of Nintendo. The Nintendo Ring Fit Adventure is considered to be one of the best selling games of Nintendo Switch console.

Aside from the mission that you can play in the game, you also have the option to exercise quietly and avoid being disturbed. In quiet mode, the player can run in place but in adventure mode, this specific action is replaced by squats. Nintendo is determined to promote physical activity by playing video games. Check whether this game is in-stock by taking advantage of the stock alerts from the Latest Deals.

In the Nintendo Ring Fit Adventure game, the player needs to complete an exercise move to defeat the enemies. The gameplay is very simple and easy to understand. The player needs to team up with others to take down a bodybuilding dragon named Dragaux which is the main antagonist in the game.

The player moves across the game world in dungeons to seek monsters which he must encounter and fight. The player should complete an exercise move in order to defeat the enemies. This is similar to a rail shooter where the player runs and jumps over obstacles in a fixed path. He can fire projectiles at items using the Ring-Con. The player can turn around in different directions just like any other role-playing game.

The player can perform about 30 different exercises that attack and damage the enemy. The amount of damage depends on how the player can effectively complete the exercise. The player gains experience points after defeating the monsters allowing him to level up and unlock additional exercises.

There are several mini-games that you might find very entertaining and interesting. You can play with other players and take turns. The Rhythm Mode which is an update of the game includes entertaining music from other Nintendo games. If you want to get information on where to find this game, then you came to the right place. You can purchase Nintendo Ring Fit Adventure at reputable UK retailers such as Amazon, Smyths Toy Stores, Zavvi, Currys PC World, Game, Very, and more.

Get Fit While Playing The Nintendo Switch

Nintendo really succeeded in letting players become more active and get off the couch with their Wii Fit U and Wii Fit games. Now, they want to do more for you by giving you a game that will improve your fitness while entertaining you even more.

The Nintendo Ring Fit Adventure game incorporates an actual adventure and exercise to keep you moving as you play it. Whether you are a dedicated workout buff or just want to have a good sweat, this game is what you need.

You can be sure that it is safe to use because of its indoor-friendly exercises. Get moving with the adventure mode and exercise your way through its story. Improve your fitness routines and level up your character. The more effective exercises you do the better it is in improving your character to complete the mission at hand.

You can also try out the Quick Play mode and do different sets of routines that are not directly linked to the story of the game. The Latest Deals has a stock checker which you can use to know where to buy this game.

Reasons Why You Should Try Out Nintendo Ring Fit Adventure

There are various kinds of workout exercises: You will not get bored with the different exercise routines which you can do all throughout the game. You can have a complete workout and tone your arms, legs, chests, and more. You can even do yoga poses, do squats, overhead lunge twists, bow pulls, hinge poses, thigh presses, and chair poses, among many others.

You can customise the workouts: In this game, you can set the difficulty level of the workout that you want to do. More advanced exercises are more precise and are harder to do. There are different levels of difficulty that are available in the game.

You can compare scores with friends: Even though this is designed as a single-player game, you can take turns with other players since no two people can play at the same time. The scores, preferences, progress, and customisations are saved. You can compare your score with your friends and push yourself to improve even more most especially if you are a competitive person.

The controllers are fun and easy to use: The Ring-Con and Leg Strap is easy to use and it detects your motion, positioning, and balance which is pretty cool for an exercise game. The Joy-Con senses the pressure and motion to grade your exercise. The controllers of this game are more advanced compared to other gaming consoles that provide similar exercise games.

It will really help you get fit: Every person has a different fitness level. This game can be played by people of any kind of fitness level since it has various levels of difficulty. People who have actually played this game constantly show significant fitness improvement. It encourages people to get up on their feet and move their bodies.