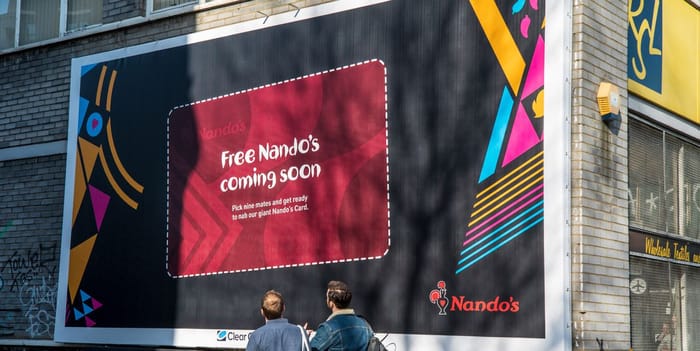 Shared by Chrisolo
1 year ago
Comment
Save competition
6 comments

To celebrate its long running loyalty card scheme, the restaurant is giving away gift cards with 10 free meals on them via massive billboards. All fans have to do is find the billboard, tear off the giant loyalty card, and take it to the nearest Nando's restaurant.

While the giant billboards will be available in Manchester and London, Nando’s enthusiasts in other cities can also grab themselves PERi-PERi rewards via peal-able loyalty cards that will appear on billboards in Birmingham, Sheffield, Cardiff, Glasgow and Bristol.

If you live elsewhere? They will also be offering flash deals on their Instagram Stories.

Nando’s say fans in London and Manchester should look out for billboards in Bethnal Green and Manchester Printworks between 29th-31st March, and also in White City, 4th-6th April, between the hours of 11.30am-7pm on Friday and Saturday, and 12pm-7pm on Sunday. All other locations will be teased on their social channels.

Nando's
What do you think of this competition?

this one sounds a bit bonkers, i like it !

Yeah , not sure of how true it is