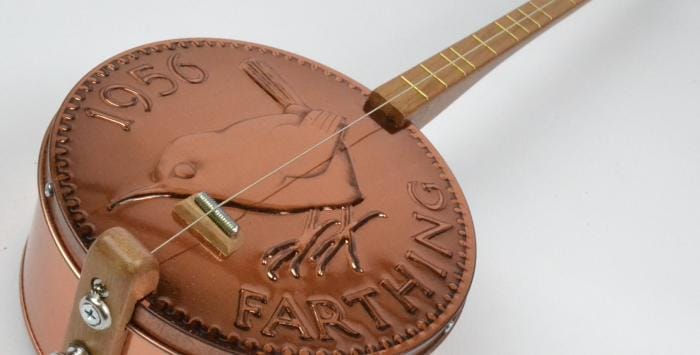 Shared by shoall
9 months ago
Comment
Save competition
8 comments

Based on the Diddley Bow, which originated in the USA, the canjo is a musical instrument fretted using a diatonic scale to produce a twangy sound similar to a ukulele. By using a simplistic play-by-numbers system, even the most novice musicians will be able to play a recognisable tune within minutes.

Ahead of their appearance at both Living North’s Yorkshire and North East Christmas Fairs, musical up-cycling masters Spatchcock and Wurzill are giving away one of their handcrafted canjos – made from reclaimed furniture and an old penny farthing. The canjo can be plugged into any standard guitar amplifier, and comes with an ‘introduction to the canjo’ booklet, meaning you’ll be rocking out in no time.

Thanks for posting shoall. I was having a bit of a sort out the other day & came across a money bag with some farthings in it. There were 4 to 1 penny back in the day. Good luck.