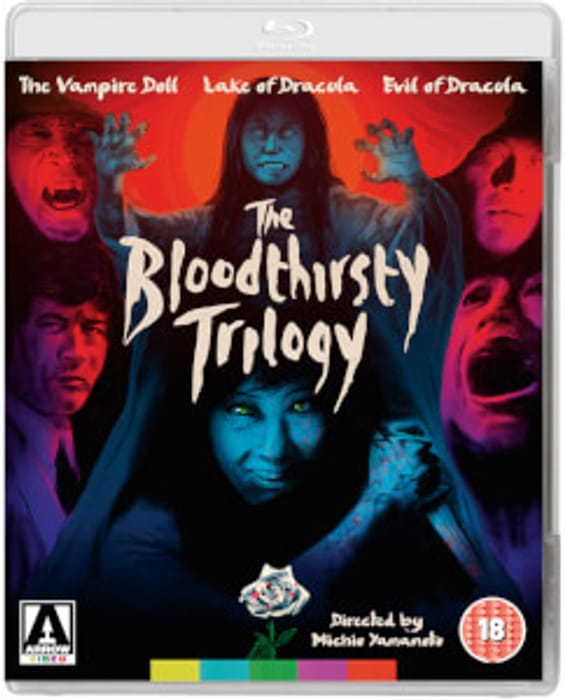 Inspired by the runaway success of the British and American gothic horror films of the sixties, Toho studios brought the vampiric tropes of the Dracula legend to Japanese screens with The Vampire Doll, Lake of Dracula, and Evil of Dracula – three spookily effective cult classics collectively known as The Bloodthirsty Trilogy.

In The Vampire Doll, a young man goes missing after visiting his girlfriend’s isolated country home. His sister and her boyfriend trace him to the creepy mansion, but their search becomes perilous when they uncover a gruesome family history. Lake of Dracula begins with a young girl suffering a terrifying nightmare of a vampire with blazing golden eyes. Eighteen years later, the dream is revealed to be a hellish prophecy when a strange package containing an empty coffin mysteriously turns up at a nearby lake. In Evil of Dracula, a professor takes up a new post at an all-girls school only to discover the school’s principle conceals a dark secret and the pupils are in grave danger.

Abounding with images of dark thunderous nights, ghostly mansions and bloody fangs, Michio Yamamoto’s trilogy emphasises atmosphere and style and is sure to please both fans of classic gothic horror and Japanese genre cinema.

We have 2,018 Zavvi deals and 728 Zavvi discount codes on Latest Deals.