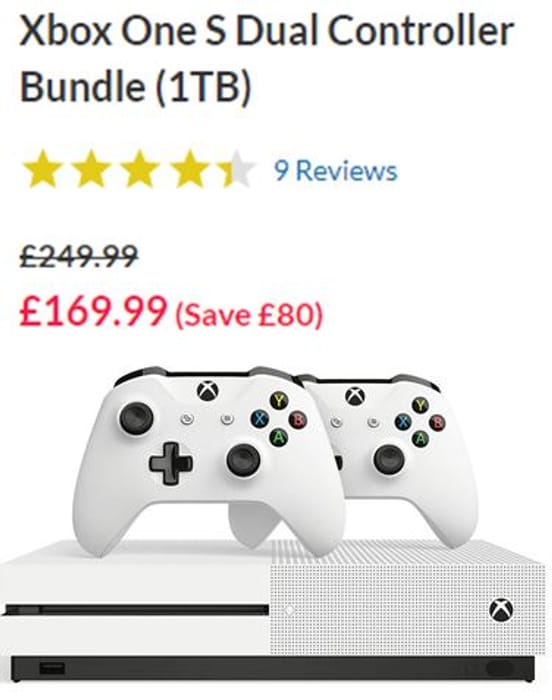 Own the Xbox One S Two-Controller Bundle and take a friend along on a gaming adventure without leaving your sofa. Go head to head with your best friend or cooperate with your significant other right out of the box. Enjoy more than 2200 games.

Play with friends near and far on Xbox Live, and enjoy the highest quality 4K entertainment with built-in 4K Ultra HD Blu-ray

and 4K video streaming. Plus, play 100 additional games right out of the box with a 1-month Xbox Game Pass trial. Xbox Play Anywhere games let you play at a friend’s house and then pick up where you left off on any Xbox One or Windows 10 PC.

Play over 1,300 games including more than 200 exclusives and over 550 classics from Xbox 360 and Original Xbox.

Connect and play with friends and family on Xbox Live, the fastest, most reliable gaming network

Xbox Game Pass gives you instant, unlimited access to over 100 highly-rated and fun games, with new games being added all the time.

Enjoy the freedom of Xbox Play Anywhere games on both Xbox One and Windows 10 PC at no additional cost.

What an amazing price. Would be a great present for my son. Definitely saving this deal

Don't wait too long. Everyone will be buying tonight and tomorrow (Cyber Monday)!

£80 in your pocket is much beeter than Very, and at this price I think I might treat myself this Christmas