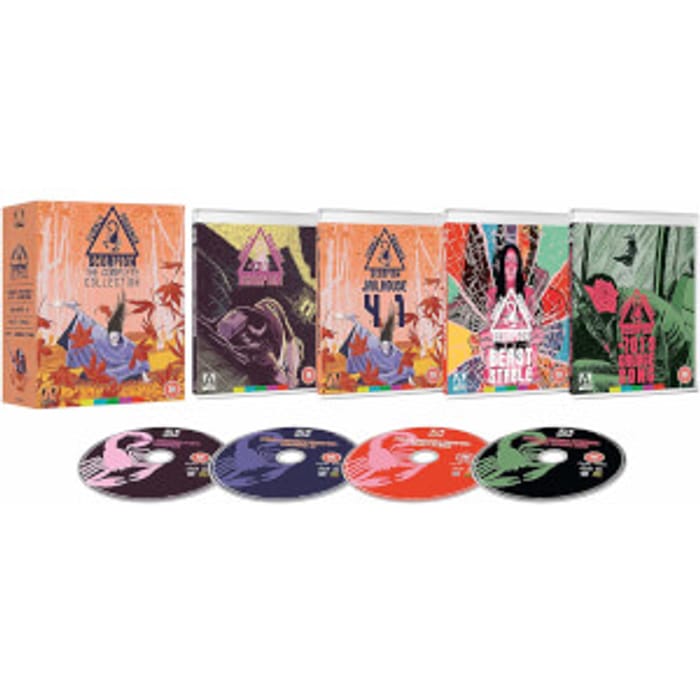 Starring the iconic and beautiful Meiko Kaji (Lady Snowblood, Stray Cat Rock) in a role that came to define her career, the four-film Female Prisoner Scorpion series charts the vengeance of Nami Matsushima, who assumes the mantle of “Scorpion,” becoming an avatar of vengeance and survival, and an unlikely symbol of female resistance in a male-dominated world.

Female Prisoner #701: Scorpion introduces Nami, a gullible young woman unjustly imprisoned, who must find a way to escape in order to exact revenge upon the man who betrayed her. The visually avant-garde Female Prisoner Scorpion: Jailhouse 41 sees director Shunya Ito and star Meiko Kaji re-unite as Nami and six other female convicts escape prison once more. The Gothic horror-inspired Beast Stable finds Nami branded public enemy #1 and on the run. She soon finds refuge with a sympathetic prostitute, but runs afoul of a local gang. The final film in the series, #701’s Grudge Song (from director Yasuharu Hasebe, Retaliation, Massacre Gun), shows a gentler side of Nami as she falls in with Kudo, an ex-radical suffering from physical and psychological trauma caused by police torture.

We have 1,998 Zavvi deals and 737 Zavvi discount codes on Latest Deals.