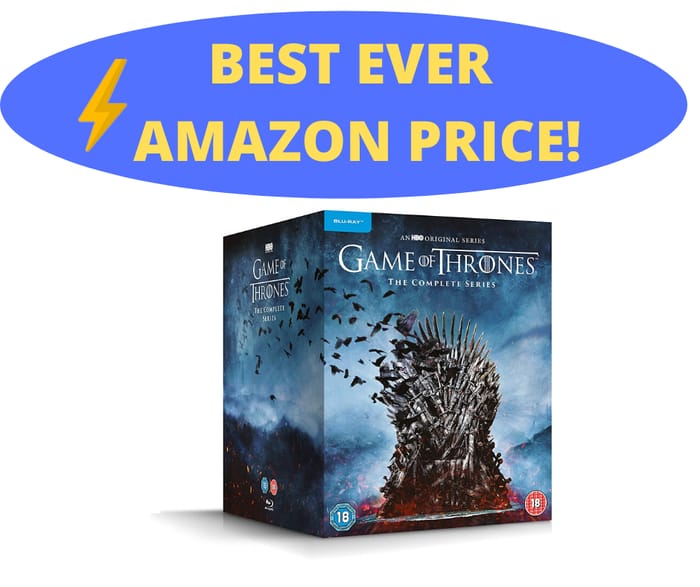 The complete series of Emmy

Award-winning hit HBO drama series Game of Thrones – an epic story of duplicity and treachery, nobility and honor, conquest and triumph. This product will feature all new bonus content exclusive to the DVD/BD release. • Blu-Ray only: Game of Thrones: Reuinion Special: A reunion show shot live in Belfast with the cast, both past and present, hosted by Conan O’Brien and available exclusively on these complete series collections. The reunion special is assembled in segments focused on Houses Lannister, Stark, & Targaryen and concludes with the key players all onstage for their final reflections on the years they shared in Westeros and Essos.•• When Winter Falls: Exclusive 30-minute featurette with showrunners David Benioff and D.B. Weiss, along with major stars and behind-the-scenes players, breaking down all that went into the colossal filming of the “Battle of Winterfell” in Season 8, Episode 3.• Duty is the Death of Love: A compelling look at how the team behind Game of Thrones and its major stars, including Kit Harington, Peter Dinklage and Emilia Clarke, brought the show to its conclusion in the series finale, “The Iron Throne.”• Audio Commentaries: 10 Audio Commentaries with cast and crew, including the show’s creators, Benioff and Weiss, on the final season.• Deleted and Extended Scenes: 5 never-before-seen deleted or extended scenes from season 8.