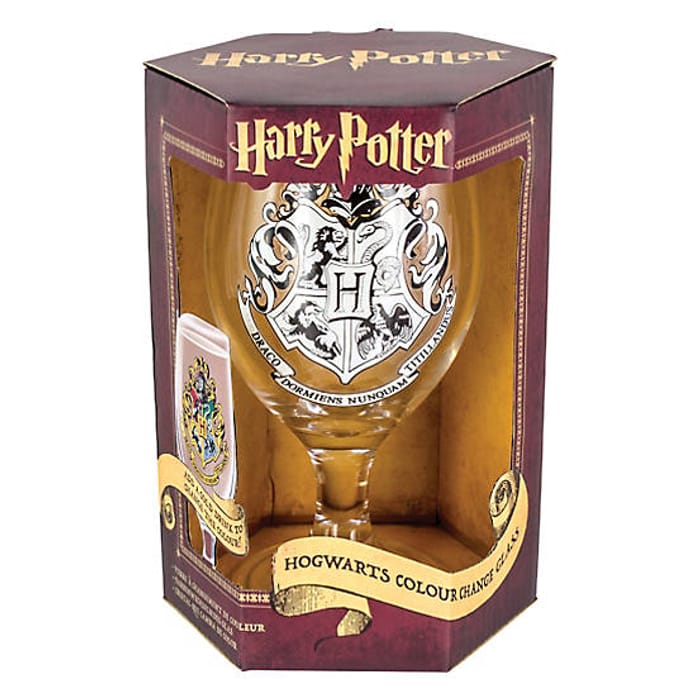 Raise a chalice to the world of witchcraft and wizardry with this beautifully designed Harry Potter colour change glass. The themed glass features the iconic Hogwarts crest, including the symbols of each of the four school houses: Gryffindor, Hufflepuff, Ravenclaw, and Slytherin; The crest also features the famous school motto ’Draco dormiens nunquam titillandus’ (Never Tickle a Sleeping Dragon). When a cold drink is added, the design will come to life, with each of the four quadrants changing to their respective colours of scarlet, green, yellow and blue, all within the gold outline of the crest. A great gift for fans young and old, this is the perfect piece of Harry Potter memorabilia, one of the most popular and successful novel and movie franchises of all time. First published in 1997, J.K. Rowling’s bestselling series of novels has since become a cultural phenomenon. Harry Potter is instantly recognisable to millions of people across the world, and is hugely popular among fans of all ages. The Harry Potter Glass is an officially licensed product.

We have 77 Freemans deals and 66 Freemans discount codes on Latest Deals.

What do you think of this Freemans deal?