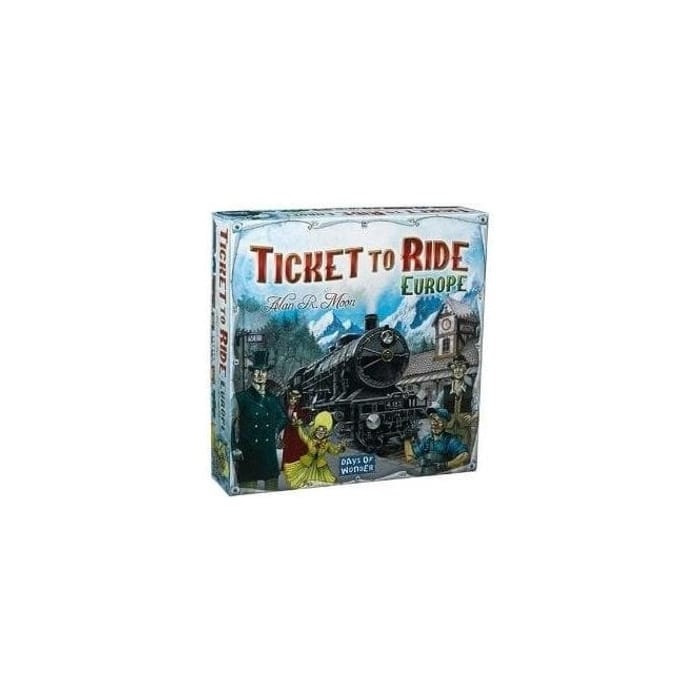 Ticket to Ride - Europe - Days of Wonder Board Game

From the craggy hillsides of Edinburgh to the sunlit docks of Constantinople, from the dusty alleys of Pamplona to a windswept station in Berlin, Ticket to Ride Europe takes you on an exciting train adventure through the great cities of turn-of-the-century Europe.

The second installment in our best-selling Ticket to Ride series of train adventures, Ticket to Ride Europe takes you into the heart of Europe. In addition to the new board map, Ticket to Ride Europe offers you brand new game play elements including Tunnels, Ferries and Train Stations. We've also upgraded you to First-Class accommodations with larger cards, new Train Station game pieces, and a lavishly illustrated game board. When Alan R. Moon, the game designer, and we embarked on this new adventure, we worked hard to make sure we'd bring you more than just a new map, but rather a whole new game experience on the tracks of turn-of-the-century Europe. Component changes: New map of Europe in the 1900s, and corresponding destination tickets. New larger train cards, compatible with the classic Ticket to Ride, but easier to shuffle. New Train Stations game pieces. Rules changes: The longest destination tickets are now handed out to each player at game's start. There are six of those; the ones the players choose to discard are put out of play for the rest of the game. Ferries: The waterways of Europe can be crossed, but at a price. Each ferry requires at least one Locomotive to embark on, as indicated by the symbol on the tracks. Tunnels: The mountains of Europe often provide convenient shortcuts, but at a price. When you venture into a tunnel, you risk a potential cave-in, so each time you play cards for a tunnel route, the top three train cards from the draw pile will be revealed, and each match with the cards just played will force you to pony up one more card to complete the set, or pass your turn. Train Stations: The newest game piece, and a fourth possible action in your game turn, the train stations can be built on any empty city, to gain access to one route of another player's network at game end, for the purpose of completing your Destination Tickets. Train Stations are quite useful when you're stuck on a dead track, especially on the congested railways of Western Europe. Each train station kept in reserve at game end is worth 4 victory points however, so build wisely!