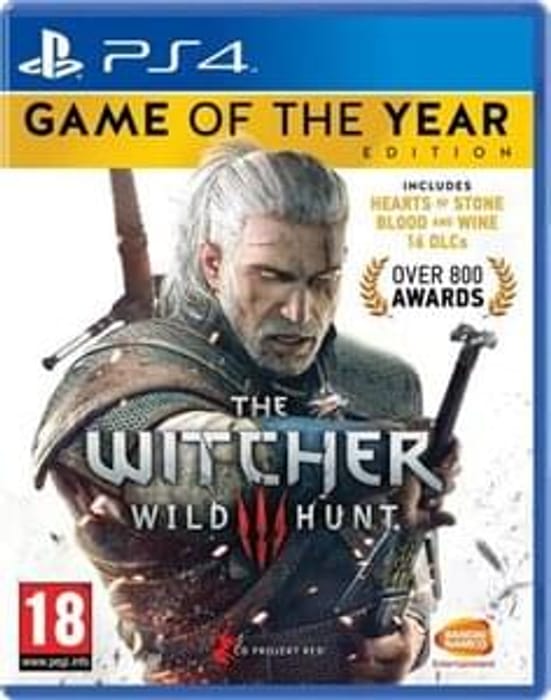 The Witcher 3: Wild Hunt - Game of the Year Edition PS4

Winner of over 800 awards, The Witcher 3: Wild Hunt Game of the Year Edition for Xbox One sets a new standard for all RPGs. Over hundreds of hours, you will travel the game's rich, fantasy lands in a story filled with memorable characters, award-winning performances and multiple branching paths.

Visit both of The Witcher 3â€

As Geralt of Rivia, The Witcher 3: Wild Hunt sees you roaming its landscapes in search of your adopted daughter, Ciri. Along the way, you will travel between villages, lending your dual swords to anyone who has the coin. As a Witcher, Geralt is a mutated superhuman who can control sorceries and has advanced reflexes and increased strength.

s order roam the wilderness solving people's problems, for a price. Using the game's branching dialogue system, you can choose to do it out of the goodness of your heart, or charge a fee.

These expansive landscapes, ripped from some twisted fairy tale, are unspoiled by loading times, and you can explore them at your leisure. Spot a giant, abandoned siege tower and want to see if there's any treasure hidden in its shadow? You can. Want to stand on a mountain and admire the beauty of this war-torn land? You can. A dynamic weather system and day-and-night cycle alter the mood as you admire the horizon on Xbox One.

From the rolling hills to the sticky swamps and even down to the ocean floor, The Witcher 3: Wild Hunt lets you explore freely as you move through its enormous world. Travel by horseback, on foot or even by boat. Once you've been to a location, you can choose to fast travel if you wish. It's a land that's 35 times larger than The Witcher 2â€

Whether it's a gang of angry bandits, a screaming banshee or an angry vampire, at some point during your travels you will need to unsheathe your blade. The Witcher 3: Wild Hunt features slick, real-time combat where you can use heavy and light attacks to cut at your foes. Combat pirouettes and rolls will see you evade any steel, claws or teeth looking to tear at your customisable armour.

Witchers can also call upon sorceries, called Signs, that allow them to influence an enemy's mind, cast fire from their fingertips, release a blast of energy, place magical traps and even encase themselves in a protective barrier. Craft potions and prepare for battle with a deep crafting system that gives players the edge if they research, coating their blade with the right ointment. Look up monsters in the bestiary and head into battle with the complete knowledge of a Witcher.