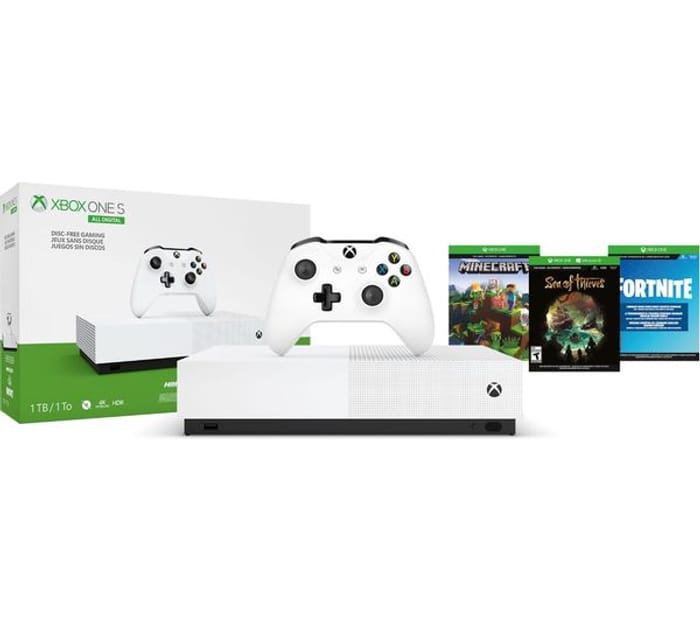 Shared by Johnny
3 months ago
Like
Comment
Save deal
1 comment
Xbox One S All-Digital Edition with Minecraft, Sea of Thieves, Fortnite & Xbox LIVE Gold SubscriptionCurrys Bundle Price: £129Discover the freedom of disc-free gamingGo digital with the Microsoft Xbox One S All-Digital Edition with Minecraft, Sea of Thieves, Fortnite & Xbox LIVE Gold Subscription.If you don't have the space for tons of console games, or you want to take your entire games library with you wherever you're going, you'll love the freedom of the Xbox One S All-Digital Edition. Download and save all your games to the cloud and they'll be ready and available to play anywhere any time. You can even pre-order and pre-install upcoming games so they're good to go the very moment they launch.You can even play your last save at a friend's house or pick up where you left off on a Windows 10 PC, with Xbox Play Anywhere titles such as Crackdown 3 and Gears of War 4. Console gaming has never been so flexible.Choose from a huge selection of gamesPlay from a selection of over 1300 amazing games with the Xbox One S. From the biggest blockbuster titles and Xbox exclusives, to iconic franchises that everyone's grown up playing, you'll have loads of choice.Watch TV shows and films in 4KIf you've got a 4K TV, the Xbox One S lets you make the most of it – you can stream 4K shows from apps like Netflix or Amazon. Everything you watch will be in incredible Ultra HD detail.Enhanced audioYour games and films will also be enhanced with Dolby Atmos and DTS:X audio. You'll get better surround sound if you use a headset, and every film you watch will be even more cinematic._______________________________________Xbox One MinecraftPlace blocks and build whole new worlds with Minecraft. Choose creative mode for unlimited resources and building or survival mode for crafting weapons, armour, and exploring unknown lands. You can also play with friends across platforms or split-screen mode for more fun._______________________________________FortniteBattle to be the last one standing in the worldwide phenomenon - Fortnite. After being dropped on a huge island with 99 other players, it's up to you to find weapons, gather materials and escape the oncoming storm. Oh and of course survive the other players. Every game of Fortnite is different, whether you strike out alone, or team up with other players to form a squad_______________________________________Xbox One Sea of ThievesDiscover the seven seas in a completely unique experience that lets you decide who you want to be in Sea of Thieves. With no set roles, you've got the freedom to approach every situation however you choose. Sail, explore, plunder and hunt for treasure - you'll need to think like a pirate if you're going to succeed!_______________________________________Microsoft Xbox LIVE Gold Membership 1 Month SubscriptionFor the ultimate online experience, an Xbox LIVE Gold Membership 1 Month Subscription is a must. Enjoy unlimited access to premium Xbox gaming, competing with the best players in the world. The Microsoft Xbox LIVE Gold Membership also gives you access to exclusive content and downloads, video chat access and the ability to chat to more than one person at once.
Black FridayConsoleCyber MondayFortniteGOLDMinecraftXboxXbox LiveXbox OneXbox One Sgaming