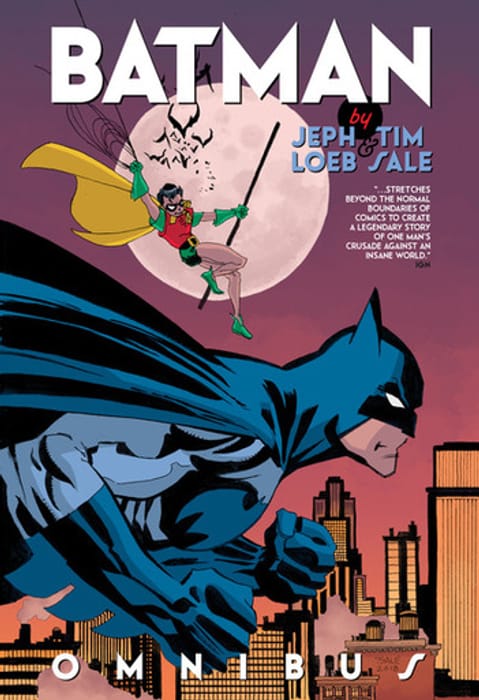 Three epic stores--BATMAN: THE LONG HALLOWEEN, BATMAN: DARK VICTORY and BATMAN: HAUNTED KNIGHT--from one of the greatest creative teams in comics history are now collected in one big volume for the first time ever in BATMAN BY JEPH LOEB & TIM SALE OMNIBUS! BATMAN: THE LONG HALLOWEEN: Taking place during Batman's early days of crime-fighting, this classic mystery tells the story of a mysterious killer who murders his prey only on holidays. Working with District Attorney Harvey Dent and Lieutenant James Gordon, Batman races against the clock as he tries to discover who Holiday is before he claims his next victim each month. BATMAN: DARK VICTORY: Once a town controlled by organized crime, Gotham City suddenly finds itself being run by lawless freaks, such as Poison Ivy, Mr. Freeze, and the Joker. Witnessing his city's dark evolution, the Dark Knight completes his transformation into the city's greatest defender. He faces multiple threats, including the seeming return of a serial killer called Holiday. BATMAN: HAUNTED KNIGHT: Taking place on the most evil of holidays, Halloween, the Dark Knight Detective confronts his deepest fears as he tries to stop the madness and horror created by Scarecrow, the Mad Hatter, the Penguin, Poison Ivy and the Joker. Also included is CATWOMAN: WHEN IN ROME, a sequel to BATMAN: THE LONG HALLOWEEN. Together, these three graphic novels are considered some of the most acclaimed graphic novels ever created from one of the greatest creative partnerships ever. This omnibus collector's edition hardcover is a must-have for any fan of Loeb & Sale! Collects BATMAN: LEGENDS OF THE DARK KNIGHT HALLOWEEN SPECIAL #1, BATMAN: MADNESS #1, BATMAN: GHOSTS #1, BATMAN: THE LONG HALLOWEEN #1-13, BATMAN: DARK VICTORY #0-13, CATWOMAN: WHEN IN ROME #1-6, SUPERMAN/BATMAN SECRET FILES 2003, SUPERMAN/BATMAN #26 and SOLO #1.

Three epic stores--BATMAN: THE LONG HALLOWEEN, BATMAN: DARK VICTORY and BATMAN: HAUNTED KNIGHT--from one of the greatest creative teams in comics history are now collected in one big volume for the first time ever in BATMAN BY JEPH LOEB & TIM SALE OMNIBUS!

All Zoom deals →
All Zoom discount codes →
Reviews
3.4
from 5 reviews
Add review
Comments
What do you think of this?

as a kid i bouht comics like nothing else an that was when superman batman and other dc and marvel comics and the price when i started was 9 old pennies. so to pay £76-19 you would be completely off your trolley. but i wonder if anyone on here would buy it. please let me know.

am i dreaming this.