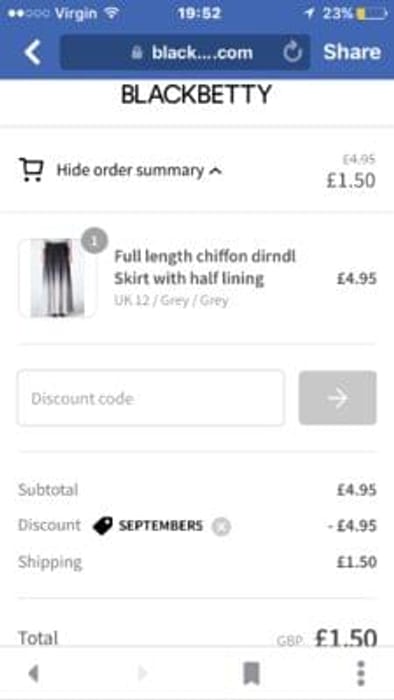 Available from Blackbetty
18 people like this deal
Get Deal

What do you think of this Blackbetty deal?

Thanks, got some more bits for my daughter, a top arrived for her from there this morning and she loves it!

Thats great that she likes it

Thanks ordered 2 tops for myself.

Be warned: I ordered from them recently and the item never turned up. They've been really hard to get hold of, and when I have managed to get hold of someone and asked for a refund, they give me a new expected delivery date and tell me to contact them after that day. Granted it was only £1.50, and it's probably just been lost in the post, but really terrible customer service.

MUSt of got lost, everyone else got theirs. Hope u get your money back or the product

jorjaboyd44 I did eventually, but it took over a month. I was willing to accept that it just got lost in the post, but their CS is appalling. Had an email saying they'd make sure it had been dispatched and would email me back - didn't get a response until I asked them if they'd managed to look into it. They eventually said it had been dispatched and got lost in the post. Emailed them a week later to say it still hadn't arrived. No response. Emailed them a week after that - still not arrived, can I have a refund. Yesterday I got a refund, and had an email saying they'd "forgotten" to post it, but it was now out of stock.

CHoward that’s shocking cs, I’m glad u got a refund.