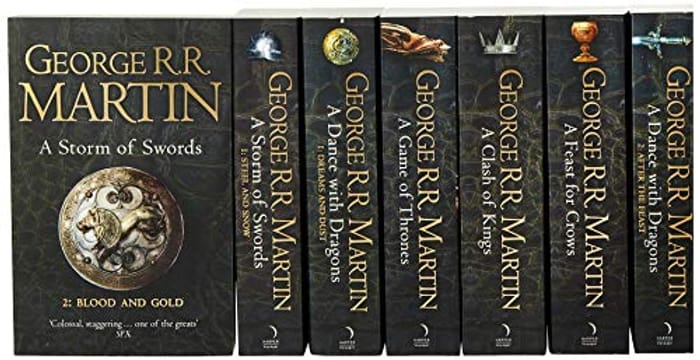 A Song of Ice and Fire, 7 Volumes at Amazon

George R.R. Martin’s A Song of Ice and Fire is the greatest fantasy epic of the modern age, and is now available in a collectible box set, including an exclusive fold-out map of Westeros. Now a major Sky Atlantic TV series from HBO, featuring a stellar cast.

George R.R. Martin's A Song of Ice and Fire series has set the benchmark for contemporary epic fantasy. Labelled by Time magazine as one of the top 100 most influential people in the world, Martin has conjured a world as complex and vibrant as that of J.R.R. Tolkien’s, populated by a huge cast of fascinating, complex characters, and boasting a history that stretches back twelve thousand years.