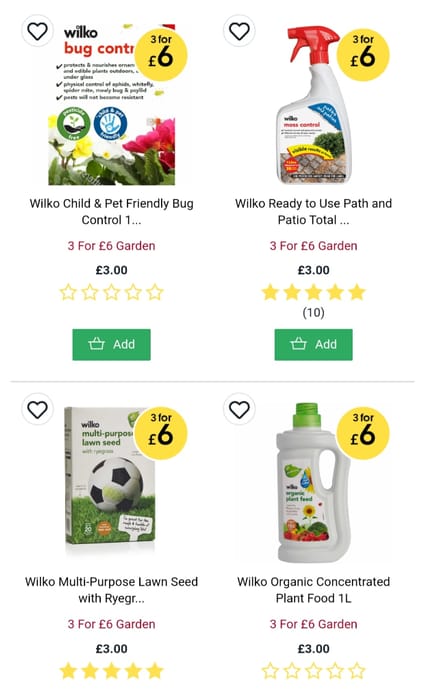 15 different products to choose from.

Originally £3 each but choose 3 different items for the total of £6.

We have 8,536 Wilko deals and 29 Wilko discount codes on Latest Deals.

What do you think of this Wilko deal? 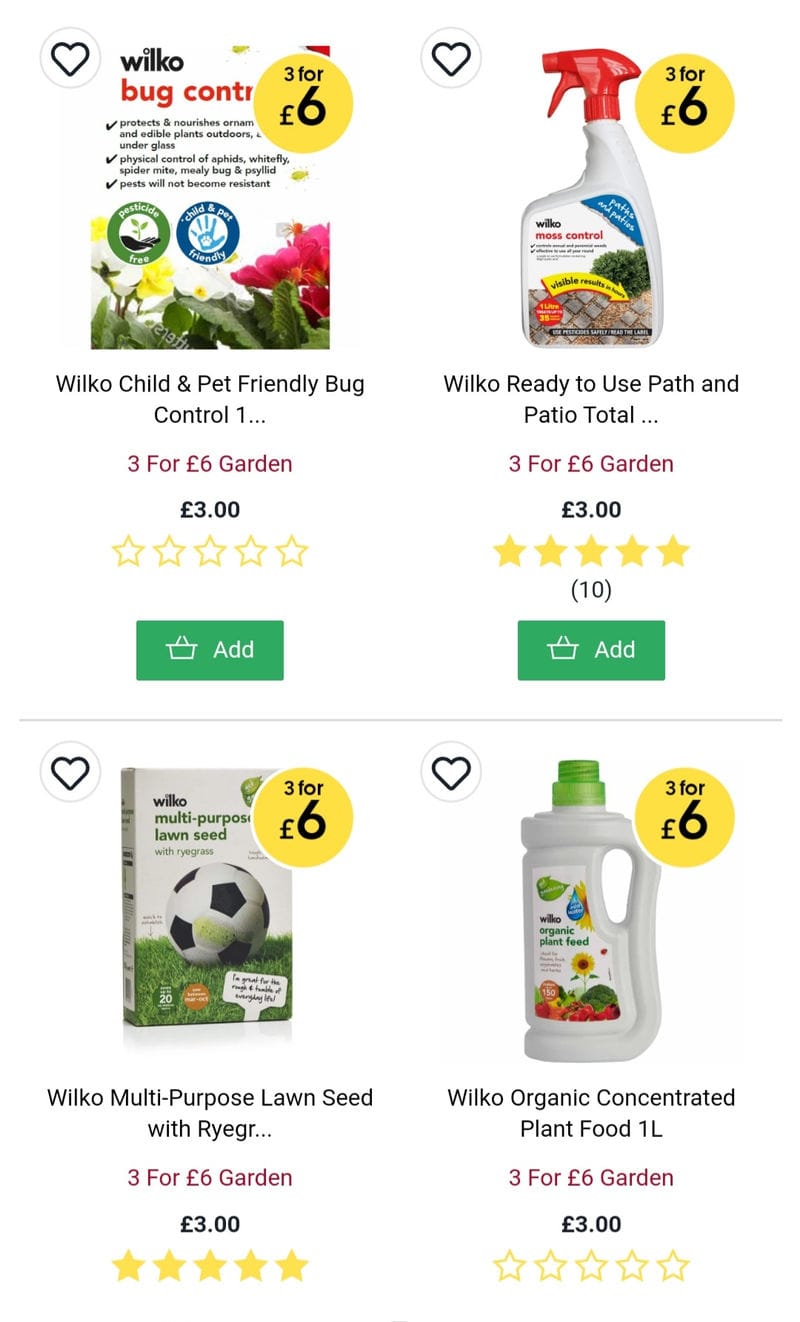 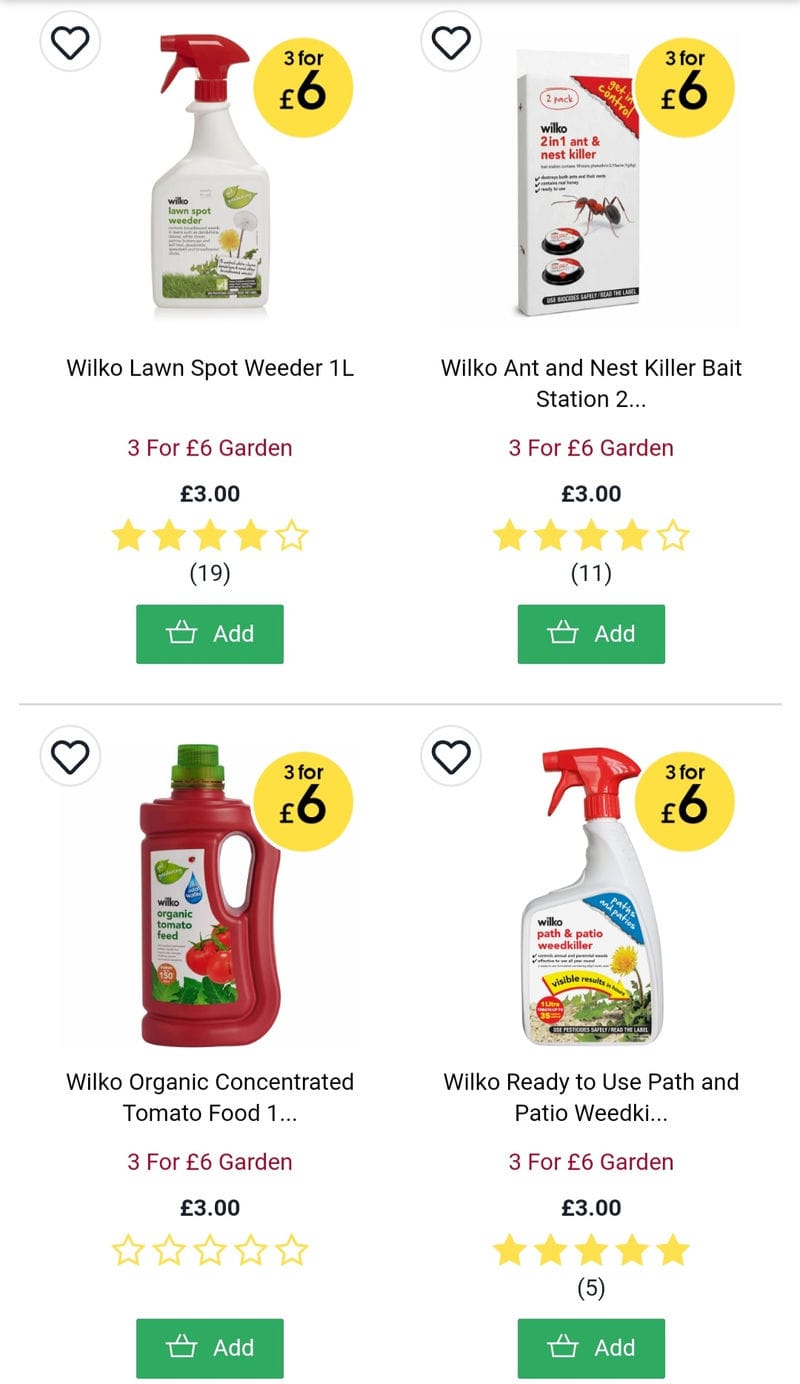 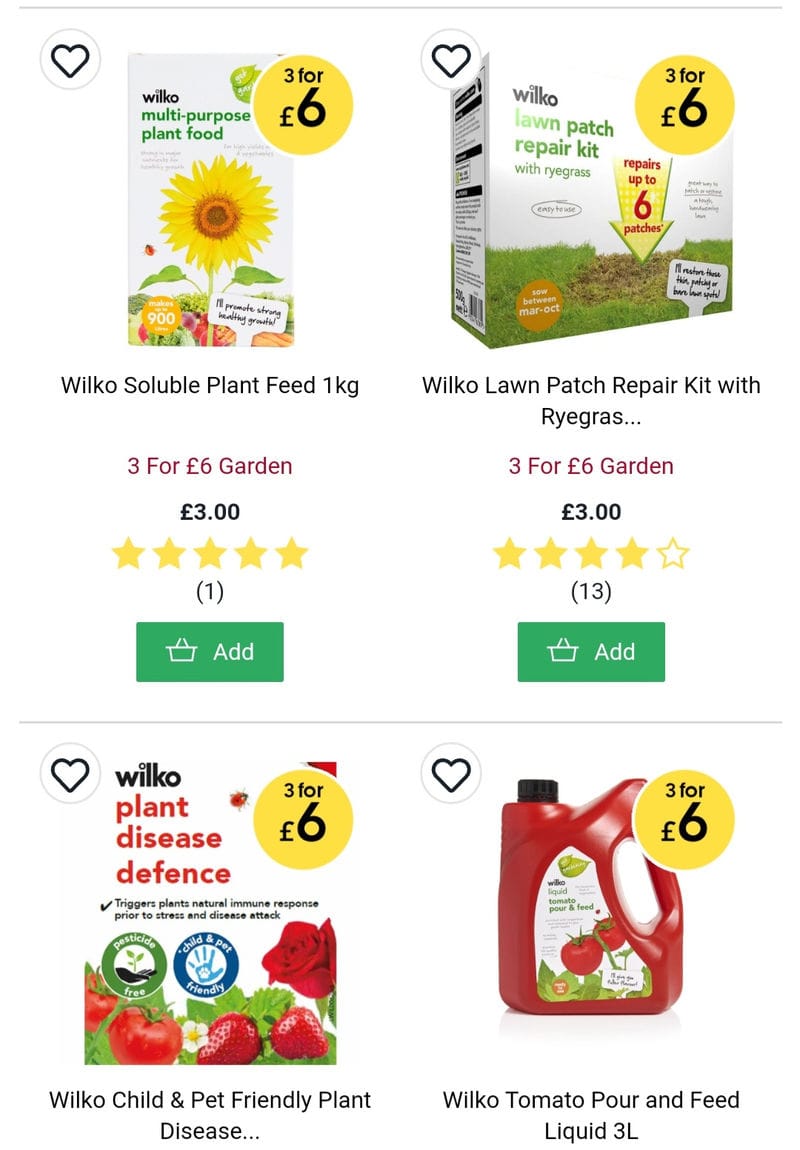 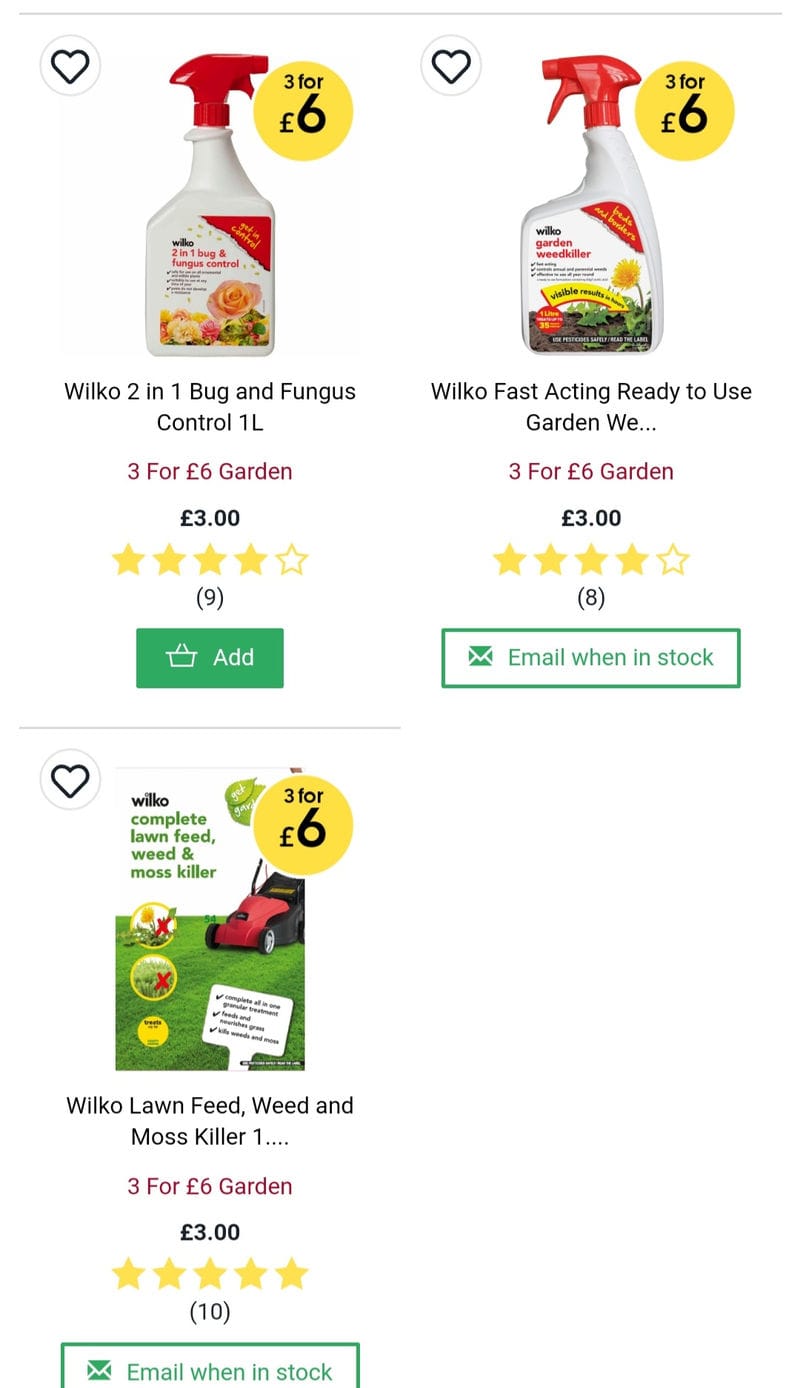 @sayittasitic so plz donf takd this personally at allll!! If i d have posted free was 3 for 6 quid offer mine would have been pulled in hearg beat

Mctash I've noticed it often does that.

It says its optional to put a sum in but if you don't it comes up as Free.

So you have to put a sum in to stop it doing that so therefore it's not optional.

Unfortunately some peoples Inc myself are pulled also due to malicious reporting... this was flagged up so its obvious what's happened. Either it was reported or my posts are being scrutinised.

Some members have a lot of luck on here and their posts remain.

All good now though as it's been reviewed and allowed so if its flagged again it'll be a deliberate report which seems to happen to a few of us lately... no coincidence either!

Sayitasitis you did not take my comment personally did you feel werre in same boat ?? Lol im not good at this lol

It's become even more evident to me now that the rules are bent for certain people.

I'm just documenting everything and then it's all getting exposed on my own group and maybe even other forms of media.

It's not positive either.

Seems my post was expired for the price being more than 5%than what it was yet a certain member has allowed hers to be unexpired and the price has gone up by much more than 5% so this proves there's a definite bias towards certain people.

It's the gift that keeps on giving.

Nothing more I love doing than exposing people, their actions, their lies and a turning a blind eye.

I'm like a dog with a bone when dodgy stuff is going on and being ignored.

I've already got a third party interested in what's going on...

By the way the certain member is someone you have chats with in the chat group...don't be fooled by them.

They have multiple accounts and nothing has been done even though the evidence has been provided.

Like I said it will all be exposed when the time is right and more investigating has been done.

UKstar I know you have been restricted in commenting because you spoke out about the multiple accounts etc as well but can you also start documenting everything from your side. I'll explain why and more in private.

nicenurse21 It gets more and more interesting the more we uncover.

I've noticed a few of your comments recently that allude to unfair or inconsistent treatment of members. I just wanted to reassure you that we do our best at LD to be as open and fair as possible and we always, wherever possible, will give everyone a second (or even third!) chance as we appreciate people make mistakes or may not be up to speed with all of our guidelines.

Our approach to moderation is always to try and give people the benefit of the doubt - having participated in more strict communities beforehand I didn't really like the experience! If you ever feel a member is breaking LD's guidelines then please do let us know, privately, via the contact form. We historically haven't found public outings or accusations have gone down well and so are against our guidelines. I appreciate we won't always make a decision everyone agrees with but please do take into account the approach I've outlined above when evaluating any steps we've taken (or perhaps not taken!)

Various people handle moderation decisions at LD and we also rely on members to report posts that may not meet our guidelines. Our goal is always 100% consistency but we acknowledge that sometimes slight differences may occur - we're ultimately human (even if I dream of building a bunch of LD robots

). If you ever feel a moderation decision is wrong or you're unsure about something please do reach out to us via our contact form. We'll always reply and either hold our hands up to a mistake or try to clarify the situation.

I hope that's provided a bit more context to some of the decisions you've perhaps seen LD make.

I appreciate your's, and everyone's, contributions to LD and always welcome feedback (including criticism) but please do remember to keep within LD's guidelines. Targeting of specific members is not allowed - I can understand the appeal of investigative or detective work to uncover potential rule breakers but any speculation, theories or accusations should be kept to the contact form - comments (including edited ones) breaking this guideline aren't allowed and can result in accounts being restricted. The subject of any "investigation" is human and I firmly believe deserves to be treated kindly and with respect. Treating everyone politely does of course work both ways and I'd implore anyone to report an unfavourable comment to us rather than getting drawn into a comment battle!

If there's anything you're still concerned about or I haven't addressed please do shout! If it's a general matter I'm happy to answer via comments but if it relates to individuals please (sorry to sound like a broken record) use the contact form. You're welcome to ask for your message to be forwarded to me

Kelsey Good Afternoon Tom, I address you as Tom because I personally feel it is rude to address someone with their surname and I was brought up with manners.

Anyway now I've got that out of the way and to address your comments.

You say you are fair to all members, I'm sorry but this is where I and a few other members will disagree with you.

Probably more but afraid to speak out.

It is has been proven that the rules have been 'bent' to suit certain individual members.

Why do you think I publicly make comments so it's highlighted and picked up on.

I appreciate that you like to give many chances but in doing so you are leaving yourselves wide open to a blatant disregard of the rules when members are not making mistakes as such but are showing acts of premeditation by making several accounts and then using them for their own advantage.

That's not a mistake it's a deliberate act.

That should not be afforded as a mistake or them given numerous chances.

It shows a weakness and encourages it to happen again and again.

As an Admin myself I am aware of the need to police in a way you yourself sees fit.

I am fair and easy going but I can equally be ruthless when I have to be and I have zero tolerance for certain things and certain types of people.

To address your comment to cotnatc you privately if I feel a member has broken the rules... I'm still waiting for a reply to a report I made sometime last week regarding a member breaking the rules by having several accounts.

I've heard nothing back so I'm sorry if I don't have much confidence in your comment and it also explains why I'm doing things publicly with transparency.

It can't be ignored if it's public and you've proven my point by addressing me yourself.

I knew it would eventually get attention from 'higher up

On a further note regarding this report, another member has also reported the same concerns, had replies and also feels nothing is being done regarding her report even though she's provided said evidence.

As for moderation decisions there is a feeling that it is biased at times and favouritism is directed towards the reported member.

I don't need to mention names as people will have seen it for themselves hence again is why I comment publicly.

Commenting publicly gets it out there and cannot be covered up, ignored or a wish for it to go away.

It also informs others as to what's going on and they themselves if suffered a negative experience due to the reported member or a biased mod decision might eventually speak out.

It's highlighting the problems of which can only turn out to be a positive thing for you if they are addressed and dealt with.

Regarding the appeal of investigative and detective work... it is an actual skillset of mine amongst others.

This is why I cannot be bullsh!tted as it's something I've been doing for many years.

I could add a lot more to this but some things have to remain private and I never reveal all my playing cards, just the ones I deliberately want people to see.

So just to confirm your own rules...if a member has multiple accounts which they actually use to gain more points as an advantage to themselves, do you not class it as deception and do you not ban these members?

Sorry if I sound like a broken record speaking legalise, old habit having studied Law.

If you look at the named accounts that have been reported you will see what has been mentioned in the reports.

I and others can only wonder why you cannot see the same and why nothing has been done...yet!

Please do feel free to contact me on my email address where there is a degree of privacy and I know I am actually conversing with you yourself and nobody else under the rank of Admin can reply.

As for you might need to restrict accounts for comments then please do make that rule applicable to the other said member in question.

Do expire her deals when posting at a much higher price like mine have been expired and do tell her not to make comments about other members as well.

Hence why I document everything.

Thank you for taking the time to address me even though my report hasn't been acknowledged.

I do appreciate the points you've made but equally please take notice of mine and other people's and any reports made by ourselves.

Have a nice Easter Sunday

nicenurse21 You too and I'll try my best lol.

Woww good deal, thank you so much for sharing this deal with us

Some good essentials there

. Wilkos always have great priced gardening stuff and this deal makes the prices even better . Can particularly recommend the Tomatofood concentrate , this is a great fertiliser for flowers in containers and baskets as well as for tomatoes ,cucumbers, peppers etc .

Good deal, gonna have a look now, thank you for sharing

Thank you for your comments everyone!

great bargains here as I was planning to buy 2 of these items in the next few days anyway ! Now I save more

What a great deal and perfect for getting the garden ready for summer. Thanks for sharing