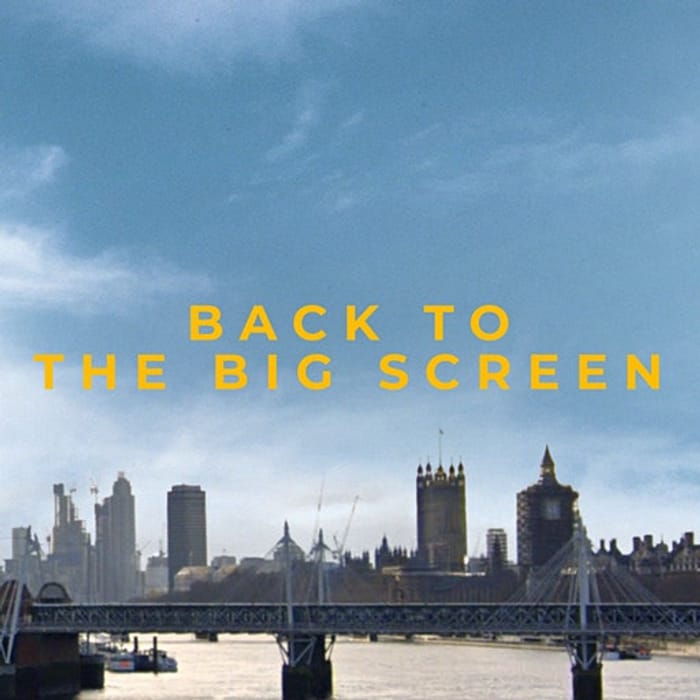 Free London Cinema Tickets - Let's Do London: Back to the Big Screen

Available from Eventbrite
29 people like this freebie
Get Freebie

Come and celebrate the magic of film in central London.

From August 26-29, you will be able to enjoy a red carpet experience with a special selection of free matinee and evening screenings in the Trafalgar Square. Each feature will be preceded by a short film showcasing a diverse range of emerging film talent, curated by the Barbican, Film London, BAFTA and BFI.

Back to the Big Screen is delivered in partnership with The Luna Cinema, with support from BFI, BAFTA and Film London and part of the Mayor of London’s ‘Let’s Do London’ campaign to welcome everyone back to London

On Friday 27th August, watch Skyfall (2012) – the twenty-third in the James Bond series, starring Daniel Craig as James Bond and featuring Javier Bardem as Raoul Silva (the villain) and Judi Dench as M.

Join the Bank’s family in turn of the century London, as a magical nanny employs music and adventure to help a family reconnect.

After Princess Leia, the leader of the Rebel Alliance, is held hostage by Darth Vader, Luke and Han Solo must free her and destroy the powerful weapon created by the Galactic Empire.

On Sunday 29th August, watch Paddington 2 – a 2017 live-action animated comedy film directed by Paul King, based on the stories of Paddington Bear.

Paddington, now happily settled with the Brown family and a popular member of the local community, picks up a series of odd jobs to buy the perfect present for his Aunt Lucy's 100th birthday, only for the gift to be stolen.

Jess Bhamra (Parminder Nagra), the daughter of a strict Indian couple (Anupam Kher, Shaheen Khan) in London, is not permitted to play organized soccer, even though she is 18. When Jess is playing for fun one day, her impressive skills are seen by Jules Paxton (Keira Knightley), who then convinces Jess to play for her semi-pro team.

FAQs:WHERE IS THE EVENT?The event will take place within Trafalgar Square.

Plan your route on tfl.gov.uk.

IS THE EVENT FREE OF CHARGE?Yes, the event is completely free to join. We hope to welcome as many people to these free screenings as possible so we have limited the number of tickets per order to five.

WILL THERE BE FOOD & DRINK AT THE EVENT?Yes, onsite there will be a range of food caterers on site. For this and to avoid queues, we’ve developed a fantastic web-based ordering app (so no need to download anything!) accessed by simply scanning a QR code. When you place an order, it will be sent straight to the chosen vendors, and once ready, you’ll receive a text to say your food is ready to collect for designated pick-up points – it couldn’t be more simple!

CAN I BRING CHILDREN?Children are permitted at our events, but please be aware that they must adhere to the film’s certification and our stewards will check to make sure that all audience members are the suitable age to see the film. Any child under 12 needs to be accompanied by an adult. Valid photographic will be required for any patron we believe to be under the age certification of the film. As this is a seated event, please note all children will be to have a registered ticket to gain entry. In order to ensure that walkways are left unobstructured, we may ask those with prams to sit towards the back or within specific seats.

CAN I BRING MY DOG TO THE SCREENING?Only registered assistance dogs are permitted to come to our events.

WILL THERE BE WHEELCHAIR ACCESS?Yes, there will be wheelchair access to the screening. Detailed information will be included within your pre-event email.

I CAN NO LONGER ATTEND THE EVENT, CAN I CANCEL MY TICKET?Yes should for any reason, you no longer be able to attend the event, we encourage you to cancel your order to allow others to take your place. You can cancel free tickets to an event before the event starts. Go to "Tickets," select your order and choose "Cancel Order". Please note you cannot cancel individual tickets within your order due to Eventbrite policy. You can also share your ticket with friends if you are unable to come, but please note each ticket will be scanned upon entry and so can only be used once.

We have 14 Eventbrite discount codes on Latest Deals.

emmabeckz
LD Team
a month ago

Hi zai thank you for your post. To avoid copyright complaints, we ask for members to please edit deals they've found elsewhere into their own words, or at the very least, to credit other deal hunters if taken from another site.

For example, for this deal, I may write, "Deal hunter Darrencampbelluk has found that..."

We ask this just as we'd want other deal sites to credit you if you had found a great deal.

Hope this makes sense and if you have any questions please feel free to contact us.

emmabeckz edited the deal. I have in the past credited deals to OP however I realised that alot of members were posting from other sites and not crediting OP. Even today that is the case. Appreciate the feedback. Much luv

I live in West Bromwich and we have a lovely park that would be ideal to have an open air cinema experience so I am going to speak to the MP of West Bromwich and see if she will be able to make it happen. zai I hope that your post gets a lot of interest and I wish you the very best of luck.

MrsPacker I hope you get your open air cinema experience. Thank you so much for the comments, much appreciated. Much luv

This is really good, love a freebie thanks for sharing the deal

CloeMorgan you are very welcome luv. Hope you get a freebie. Appreciate your comments. Much luv

This is a brilliant freebie, thanks for sharing

Link is working but all sold out