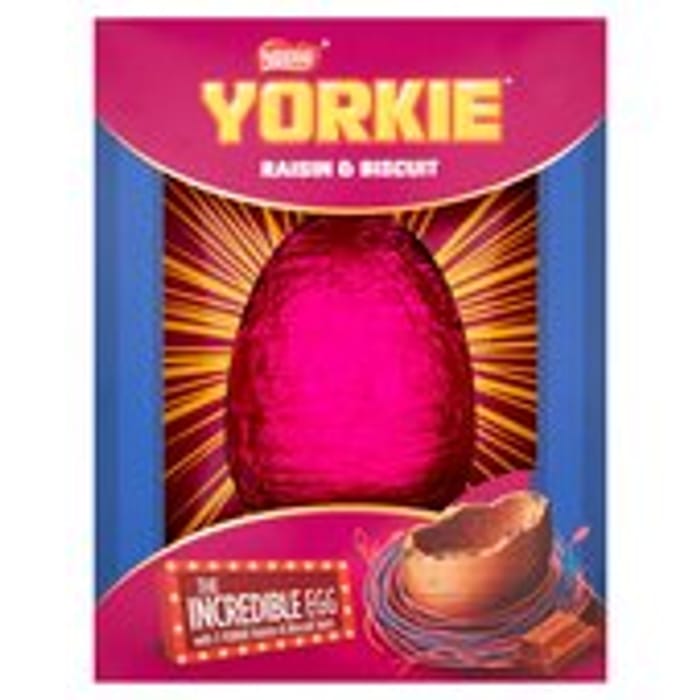 Offer price £8 when you order by 07/04/2019. Offer subject to availability. Maximum 20 promotional items per customer.

Buy this often? Make it a Regular and we'll add it to your trolley for you.

YORKIE® evolved from a bar that was originally launched in 1924 under the name 'York Chocolate' as a single milk chocolate bar produced in York. Throughout Second World War York Chocolate was the only chocolate Rowntree's continued to produce, it was produced as a plain chocolate with added vitamins to be sent to refugees in camps, or supplied for soldiers ration packs.

In 1966 York Chocolate was discontinued, then 10 years later in 1976 York Chocolate is re-launched under than brand name YORKIE®, with its name due to it being manufactured at our factory in YORK where it still continues to be produced to this day.

YORKIE ® set out to be a chunky alternative to other rival chocolate bars and was advertised as the bar of choice of the long distance lorry driver in it TV advertisement with the caption "YORKIE - chunky milk chocolate".

YORKIE® advertising continued the association with motoring through the 1970's and 1980's and other later tongue-in-cheek campaigns have consistently positioned it as the man's chocolate brand.

YORKIE® does not contain any artificial colours, flavours or preservatives.

YORKIE® is part of the Nestle Cocoa Plan, which works with UTZ to ensure a better future for cocoa farmers and even better chocolate for you. Find out more at www.nestlecocoaplan.com

Good to remember: Enjoying chocolate as part of a varied, balanced diet and a healthy lifestyle, is one of life's little pleasures.

We have 4,011 Morrisons deals and 138 Morrisons discount codes on Latest Deals.