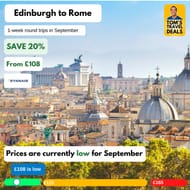 I have found this cheap flight deal with Ryanair. It is for 6 to 9 days round trip from Edinburgh to Rome. Save 20 per cent on the average price for flights in September...
Google deals
£108£130.56 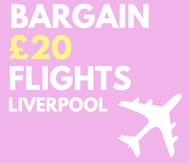 You Need to See These Cheap Flights from Liverpool (Read Info)

Please be aware of any current travel restrictions - you can read the Government travel advice here. If you're interested in going on a holiday in April you have to check out...
Google deals 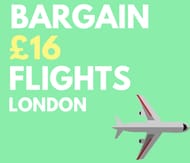 You Need to See These Bargain Flights from London (Read Info)

Please be aware of any current travel restrictions - you can read the Government travel advice here. If you're looking to take a break in March you have to check out these...
Google deals 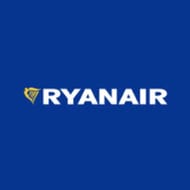 Flash sale at Ryanair - at these prices it will cost you more to get to and from the airport that the flight itself! Hurry as expires midnight tonight so you don't have long! Get...
Ryanair deals 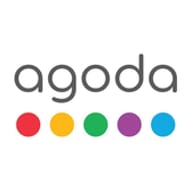 5% off Rome Breaks at Agoda Take advantage of this voucher code to get stunning savings on your accommodation with amenities like breakfast wifi and more from this online site....
Agoda (Global) vouchers
5% off

Conditions: Prices are from and per person based on 2 sharing the lowest cabin grade unless otherwise stated. Prices are live and accurate at the time of publish, however can...
Cruise Nation deals
£749£1,699

2 Nights Hotel Stay in Rome with London Ryanair flights included NOW from £119 per person at last minute. Looks like a lovely place! Hope it helps someone...
Lastminute.com deals
£119

5% off Hotel Accommodation in Rome

Book the perfect getaway with Agoda the expert accommodation provider. If you need somewhere to rest your head on your next holiday youll find it at Agoda. Whether you're...
Agoda (Global) vouchers
5% off 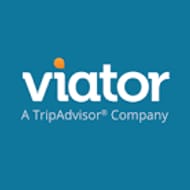 Extra 10% off Bookings at Viator - including Barcelona, New York City and Rome

to get your discount of Extra 10% off Bookings at Viator - Including Barcelona New York City and Rome use the voucher code above at the till and the asistant will sort it for u...
Viator-A Trip Advisor Company vouchers
10% off

Looks like a really good deal if you need a holiday but can't afford one. You buy a ticket for the date range than you want either June - August at £129 per person or September -...
Wowcher deals
£99

Conquer the sites of the Italian capital with a 2-3 night city break to Rome Check in to the 4* Smooth Hotel or the 4* Regal Park Hotel Wake up at your leisure and then head to...
GoGroopie deals
£69

Extra 10% off Bookings - including Barcelona, New York City and Rome

Extra 10% off Bookings - Including Barcelona New York City and Rome Long press the code to copy C3VNWZHHX3 Enjoy the great deals with the code!!!...
Viator-A Trip Advisor Company vouchers
10% off

Conquer the sites of the Italian capital with a 2-3 night city break to Rome Check in to the 4* Smooth Hotel or the 4* Regal Park Hotel Wake up at your leisure and then head to...
GoGroopie deals
£69£151

The Deal Marvel at the galleries museums and ruins of historic Rome, head to Venice to experience a world of waterside mansions and winding canals, then spend four nights at a...
Travelzoo deals
£449

An urban-chic hotel with minimalist interiors housed in a classical period building near Romes Termini station - includes breakfast and use of a Samsung mobile phone...
Secret Escapes deals
£36£68

Rome: 2-5 Nights at a Choice of 4* Hotels with Breakfast and Flights*

The Hotels The four star Marc Aurelio Hotel awaits guests just a 10-minute ride from the Vatican city. With a metro station nearby visitors can easily explore the iconic...
Groupon deals
£89 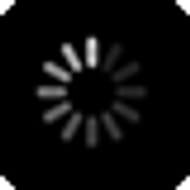 A contemporary and sleek minimalist-inspired hotel in central Rome, with breakfast and a welcome drink Accommodation Ancient wonders and Renaissance masterpieces greet you at...
Secret Escapes deals
£32£62

Rome and Venice: 4 or 6-Night 4* Break with Flights and Train Transfer *

The Hotels Situated nearby the Cornelia metro station within the peaceful Aurelio district of Rome the 4* Aurelius Art Gallery Hotel offers a relaxed stay with an easy connection...
Groupon deals
£129

A colourful boutique hotel in Romes historic Prati district with a rooftop restaurant and splendid views - including breakfast and a suite option Accommodation Nestled in Romes...
Secret Escapes deals
£32

WOW! London to Europe for only £18 Return!

Update - Ryanair has a Winter flight sale on. Press the blue button above first to see if it comes up for you. If not then checkout other flights here. Ryanair Flights from...
Momondo deals
£18£144

This package includes Flights and 3 nights at 4* Hotel Ars in Rome Deal also includes breakfast Hotel is rated 4/5 in TripAdvisor Check other dates and prices at...
Travelinteraction deals
£194

talian glamour and cool interiors at a postmodernist hotel in Rome with a panoramic roof terrace includes breakfast and a welcome drink Accommodation Guestrooms err on the...
Secret Escapes deals
£72

A classic escape to Rome's historic heart staying at an elegant hotel with sophisticated decor and enchanting vistas, including breakfast and dining discount After three years of...
Secret Escapes deals
£59 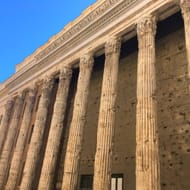 Combine a grand hotel stay in central Rome with a Six Nations rugby match includes flights and breakfast 649pp for 3 nights. For lovers of culture and sport combine an elegant...
Secret Escapes deals
£649£844

If you want to visit Rome but you have a limited budget then you came to the right place. Our team of enthusiastic bargain hunters has updated the list of the latest cheap Rome deals just for you. Check out the offers of Wowcher, TK Maxx, and other popular UK retailers and see which deals are the most affordable and reasonable. Take advantage of the latest Rome deals, discount codes, and offers available online. Get access to cheap yet reliable vacation packages and products that popular UK retailers are selling on the internet.

Rome City is the capital of Italy located at the Tiber River in west central part of the Italy. Ever wondering why Rome is one of the best place to visit in Europe? Here’s a list of five of the many places you can visit in Rome:

How to Get Cheap Rome Deals in the UK

Rome is not just a beautiful place to spend your holidays but definitely a place to visit because of its historical facts since ancient time. If you are looking for a cheap flights to Rome, package holidays to Rome or luxury Rome holidays, you’ve come to the right place! From cheap cheap holidays and Rome flights price drops to cheap city breaks and Holiday Inn Rome, you will surely find the cheapest Rome for a weekend deals at Latest Deals.

We have a community of bargain hunters who are always looking out for the best possible bargains on holiday to Italy that will provide with some serious money off on your purchases. While our team of money-saving experts are regularly sharing essential tips and tricks to help you save on your instore and online shopping. Most UK retailers such as Groupon, Expedia UK, Secret Escapes, Wowcher, and more, regularly have sale events where you can save as much as 60% off on a wide range of Rome deals. They reduce their prices further during Black Friday and Boxing Day. However, you can maximise your savings and get additional discounts by using the latest Rome discount codes you can find here.

The promos and offers we have here are available for a limited time only, so grab them right away before they expire. Do not forget to bookmark this page and never miss out on fantastic savings and everyday low prices from your favourite UK retailers.

As legend has it, Rome, Italy, was founded by the twin brothers, Romulus and Remus, in 700 B.C. The former Caput Mundi, or Capital of the World, sits beneath Palatine Hill, where the ruins of its original incarnation are open for exploration.