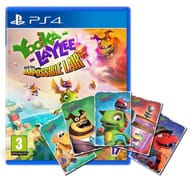 Yooka & Laylee are back in a brand-new platform hybrid adventure! They must run jump and roll their way through a series of challenging 2D levels, face a puzzling Overworld and... Read moreThe Game Collection deals
£13.95
Get Deal

Best Ever Price! Yooka-Laylee and the Impossible Lair (Nintendo Switch)

Yooka-Laylee and the Impossible Lair is a brand-new platform adventure from some of the key creative talent behind 'Donkey Kong Country'. 2.5D Platforming! Each level offers... Read moreAmazon deals
£14.99£29.99
Get Deal 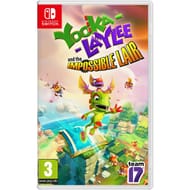 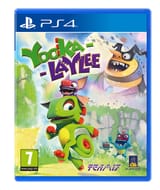 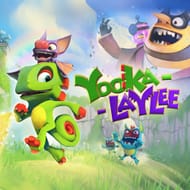 Playtonic has confirmed that at launch Yooka-Laylee on Switch will be a digital-only game but a physical release may be in the works for the coming months. While the cheapest... Read moreNintendo deals
£28.58£34.99
Get Deal 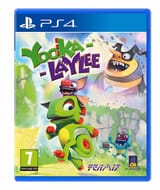 Seems to be the cheapest price and as always with Base it includes free delivery. :) The Xbox One version is still going for about £20+ or so. I'm curious how much the Switch... Read moreBase deals
£11.95£13.99
Get Deal 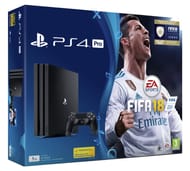 Yooka-Laylee is an all-new open-world platformer from genre veterans Playtonic! Explore huge beautiful worlds, meet (and beat) an unforgettable cast of characters and horde a... Read moreBase deals
£18.85
Get Deal

Good price for Yooka laylee. Hope it helps someone out... Read more365games deals
£18.99
Get Deal

£25.85 for a New copy @ Base (Credit to Rockman ) An all-new 3D platform adventure from Playtonic Games a new studio formed by key creative talent behind Banjo-Kazooie and... Read moreGrainger Games deals
£24.99
Get Deal

Low price on this one. Looking forward to it. Xbox link: http://www.base.com/buy/product/yooka-laylee-xbox-one/dgc-yooklx1.htm... Read moreBase deals
£25.85£39.99
Get Deal

There are a lot of amazing cheap Yooka Laylee deals online to choose from and you will surely get great value for your money. Here is where you can find limited and the most awesome deals online. Save as much as 60% on gaming bundles when you buy from Argos, Amazon, eBay, and other UK sellers. Special offerings such as free deliveries, extended warranties, and discounted rates are also up for grabs. Shopping for cheap Yooka Laylee games online can be a bit challenging when you are on a tight budget.

Yooka-Laylee is a platform game that was published by Team17. The game was released in 2017 for Nintendo Switch, Xbox One, PlayStation 4, Windows, macOS, and Linux. The game was developed by Playtonic Games.

It is a successor to the Banjo Kazooie series which is released from Nintendo 64. The developer of the game initiated a Kickstarter campaign which attracted media coverage. The gameplay of Yooka-Laylee is to follow the quest of chameleon Yooka and bat Laylee to retrieve a magical book from an evil corporation.

With the release of Yooka-Laylee, it received mixed reviews and the critics are divided in their opinions. The success of the predecessors of the game is enough to make Yooka-Laylee a success as well. The gameplay of Yooka-Laylee is similar to the spiritual predecessor, Banjo-Kazooie. The player searches and collects objects in an open 3D environment.

This game is played from a third-person perspective just like the Banjo-Kazooie and Chameleon Twist series. Here you can defeat enemies, collect objects, and solve puzzles. You can open and explore worlds that are contained in the magical books. Collect Pagies which are golden book pages that are used to unlock new worlds in the game.

Why Should I Play Yooka Laylee?

You get to explore beautiful worlds and be amazed at the cast of characters good and bad. there are also lots of shiny collectibles that will test your patience and determination. It is also very rewarding once you opened up new worlds to explore.

You have an arsenal of special moves that you can use to your advantage. There are also a variety of puzzles that are quite challenging which will develop your decision making and problem-solving skills. This game is not only fun to play but it is educational as well.

The Gameplay of Yooka Laylee

In the Yooka Laylee game, you have playable characters including Yooka which is a chameleon and Laylee which is a bat. These characters have different abilities like sonar blasting, tongue whipping, and sky soaring.

The characters can also eat berries to gain temporary powers such as breathing underwater, fart bubble, and fire breath. These abilities use a power meter that is filled by collecting butterflies. A new ability is to earn when you collect enough quills which allows you to purchase them from Twozer who is a snake who wears pants. He is the salesman in the game.

The characters can also do various transformations that will grant them special abilities. This is achieved when you give Mollycools collectibles to Dr. Puzz who is an octopus-like scientist. The game also features multiplayer mode from two players. It also features eight different minigames and a 2 to 4 player adversarial local multiplayer mode. It is an all-new open world platformer that is guaranteed to give you many hours of entertainment.

How to Get Cheap Yooka Laylee Deals Online

You can read the Yooka Laylee review to see if this game is worth your time and effort. But rest assured that this is a very entertaining game that can be played by children and adults. Deals and voucher codes that you can use at reputable online UK sellers will certainly not disappoint you.

Our massive community of bargain hunters has gathered the best cheap offers, deals, and voucher codes. When purchasing video games online, you can save more money when you purchase in bundles. There are game bundles which allow you to get bigger discounts and get additional games. This will provide you with hours of entertainment and you can play them together with your friends.

Here is a list of the UK retailers where you can get cheap Yooka Laylee bargains and deals:

With brilliant selections from industry-trusted retailers, we have the best Playtonic games deals to help you stay on top of your savings. There are a lot of amazing Yooka Laylee 2 deals online to choose from and you will surely get great value for your money.