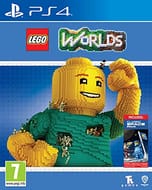 Add postage costs for non-Prime. Make your worlds come to life with customisable characters both friendly and fearsome. race, soar, zoom, and ride on a variety of vehicles and...
Amazon deals
£10.79£14.83 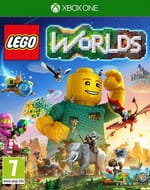 CHEAP! Xbox One LEGO Worlds £13.95 at the Game Collection

EXPLORE. DISCOVER. CREATE. LEGO Worlds is an open environment of procedurally-generated Worlds made entirely of LEGO bricks which you can freely manipulate and dynamically...
The Game Collection deals
£13.95

You can get this Lego Worlds PC from www.cdkeys.com reduced from £24.99 to £1.99. Uncover hidden treasures in environments that range from the fun to the fantastical. Make your...
CDKeys deals
£1.99£24.99 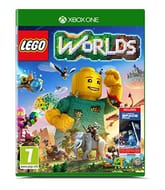 Make your worlds come to life with customisable characters both friendly and fearsome.race, soar, zoom, and ride on a variety of vehicles and creatures from diggers and...
Amazon deals
£13.99£17.49 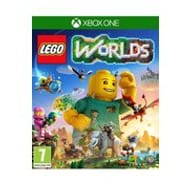 EXPLORE. DISCOVER. CREATE. TOGETHER. LEGO Worlds is an open environment of procedurally-generated Worlds made entirely of LEGO bricks which you can freely manipulate and...
Studio deals
£19.99£22.99

Now includes the Sandbox mode! This is a totally creative building experience for LEGO Worlds: you'll have all the tools objects and bricks unlocked right from the start. Let...
Fanatical deals
£12.49£24.99

Gamers can embark on a quest to become a Master Builder by helping other LEGO characters along the way find a sword for a king protect a farmer from a zombie invasion, or build...
CDKeys deals
£22.99£24.99 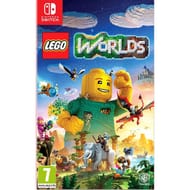 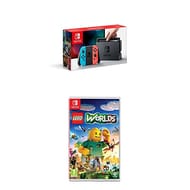 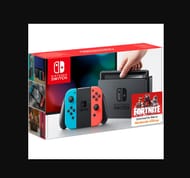 NINTENDO SWITCH NEON with SPORTS PARTY and LEGO WORLDS Only £299.99

I have found an awesome deal with a great price. You can get it from www.game.co.uk. The Nintendo Switch is both an innovative and remarkable gaming console that can be played in...
GAME deals
£299.99 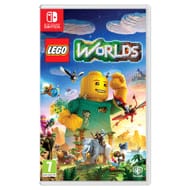 10% off LEGO Worlds Orders at Nintendo

10% off LEGO Worlds Orders at Nintendo...
Nintendo vouchers
10% off 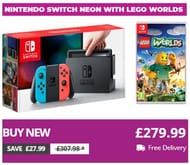 Never played it myself but going from reviews it's a decent game for fans of the genre (similar to Minecraft)...
The Game Collection deals
£17.95£27.95 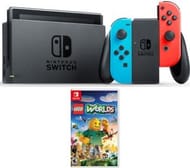 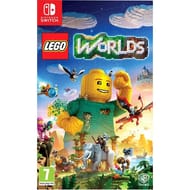 LEGO Worlds only £13.85 at Base. I have been looking around for this game and this is the cheapest price that I have found for it. https://www.youtube.com/watch?v=GCW5LBo_1v4...
Base deals
£13.85 https://www.youtube.com/watch?v=S-DCT3gDxQ8 EXPLORE. DISCOVER. CREATE. LEGO Worlds is a galaxy of procedurally-generated Worlds made entirely of LEGO bricks which you can freely...
Games Centre deals
£19.95£29.99

EXPLORE. DISCOVER. CREATE. LEGO Worlds is a galaxy of procedurally-generated Worlds made entirely of LEGO bricks which you can freely manipulate and dynamically populate with LEGO...
ebay deals
£22.49£29.99

LEGO Worlds is a galaxy of procedurallly-generated Worlds made entirely of LEGO bricks which you can freely manipulate & dynamicallly populate with LEGO models. Explore each World...
Simply Games deals
£17.85

EXPLORE. DISCOVER. CREATE. LEGO Worlds is a galaxy of procedurally-generated Worlds made entirely of LEGO bricks which you can freely manipulate and dynamically populate with...
Grainger Games deals
£21.99£34.99 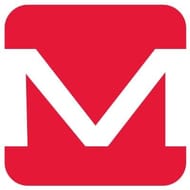 You might want to buy Lego Worlds for your children. Take advantage of special Lego Worlds offers from clearance sales and enhance your shopping experience from the best options. You won't have to leave home to use the latest cheap Lego Worlds voucher codes and go shopping for the item that you want to buy. Save as much as 60% on selected items when you buy from Simply Games, eBay, and other UK sellers. Our team of enthusiastic bargain hunters has tested the latest Lego Worlds deals so you can be assured that any voucher code is up-to-date

Traveller’s Tales developed and introduced Lego Worlds, a Lego-themed sandbox game which Warner Bros. Interactive Entertainment published. With the presence of a 3D procedurally generated world, players are enabled to create their own constructions.

Everything about Lego Worlds started on June 1, 2015, when a beta version of the game was released. It was found on Steam Early Access. On the year 2017, PlayStation 4, Microsoft Windows and Xbox One became a platform for the game as well. It was only on September 5, 2017, when Nintendo Switch launched its version of it.

Lego Worlds is a video game which gives players the chance to build their own world with the use of Lego bricks. As a player, you may be rewarded for collecting objects which are found all over the maps with “studs” as the currency of the game. Construct items with these. You can also come up with your own world with a predefined Lego structure that becomes possible with a brick-by-brick editor tool. Even the appearances and outfits of the players can be changed too.

Moreover, there are also landscaping tools that you can utilise in modifying the terrain and environment. On top of this, there is also a variety of vehicles including helicopters and creatures that are found in the game. Hence, there is a multiplayer option that is bound for world-sharing. This is added to the updates of the game.

What you need to Understand Before Purchasing Lego Worlds

In Lego Worlds, your goal should be a Master Builder. Before getting the game for you, here are some of the tips that you must think about:

This world generation title is almost like Minecraft. However, the assets are lego. With its expanded platforms, you can surely play it with ease. Prior to buying it though, what must you remember?

Where Can I Get Cheap Lego Worlds Deals in UK?

Our massive community of bargain hunters is always on the hunt for Lego Worlds game sales, deals, discounts and special offers online. We also have a team of money-saving experts who regularly share essential tips and tricks that can make you save more on your online and instore purchases for Lego Worlds PS3, Lego Worlds PC and more.

Most UK retailers have sale events, seasonal clearance, and flash sales where you can save 50% off of the original price of Lego Worlds DLC, Lego Worlds Wii U, and more. They also reduce their prices further during Black Friday, Cyber Monday, and Boxing Day. But if you want to maximise your savings, make sure to use the latest Lego Worlds discount codes that you can find here. There are even voucher codes where you can get freebies and even a free delivery.

Here’s a list of UK retailers where you can get every day low prices on Lego Worlds:

Do not forget to bookmark this page and never miss out on amazing savings, fantastic discounts, and every day low prices from your favourite online shops in the UK!